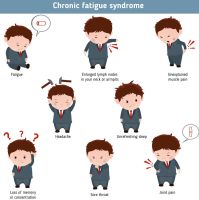 Sleep problems. This makes sense, obviously, since if a child doesn’t get enough sleep, or good enough sleep, they will be tired. There are lots of ways this can happen, such as:

Staying up later than they should for homework or whatever reason. Children need at least 8 to 10 hours of sleep a night; if they are getting less, it catches up with them

Waking up frequently during the night, whether it’s because they are a light sleeper or because of a sleep disorder

Sleep apnea, or pauses in breathing that happen during sleep. The most common cause is enlarged tonsils or adenoids, but there are other causes as well.

There are some infections that can make children very tired, and some of them can last for weeks or months.

Chronic illnesses, such as asthma. When chronic illnesses are in poor control, they can cause fatigue. The reason for the fatigue depends on the illness. For example, children with poorly controlled asthma can feel frequent shortness of breath, which makes them feel tired. For some illnesses, feeling tired may be the first clue something is wrong.

Hypothyroidism. When the thyroid gland doesn’t produce enough thyroid hormone, the metabolism of the body can slow down and make the person feel tired.

Heart problems. This is very rare in children, but if the heart is weak, it can cause fatigue.

Depression, anxiety, or other mental health problems. When life feels hard for children, for whatever reason, they may feel it and express it as fatigue. This is much more common than many of the medical reasons listed above.

Just as adults can have chronic fatigue without any clear medical reasons, children can as well. Children can feel so tired that they have trouble with normal activities such as school, sports, or playing with friends.

What to do if you have a tired child

If your child is complaining of feeling tired all the time for more than a week or two, you should make an appointment with your doctor so that the doctor can:

Take a very careful history of the fatigue and any associated symptoms, and ask questions about everything going on in your child’s life, including sleep habits and anything that could be causing stress or anxiety

Do a thorough physical examination, looking at your child’s weight and growth and looking for any physical abnormalities

Do any tests that might be needed. Testing would depend on your child’s symptoms and physical examination, and could include blood tests, urine tests. or imaging such as x-rays or MRIs

Decide if a visit with a psychologist or other mental health professional would be helpful.